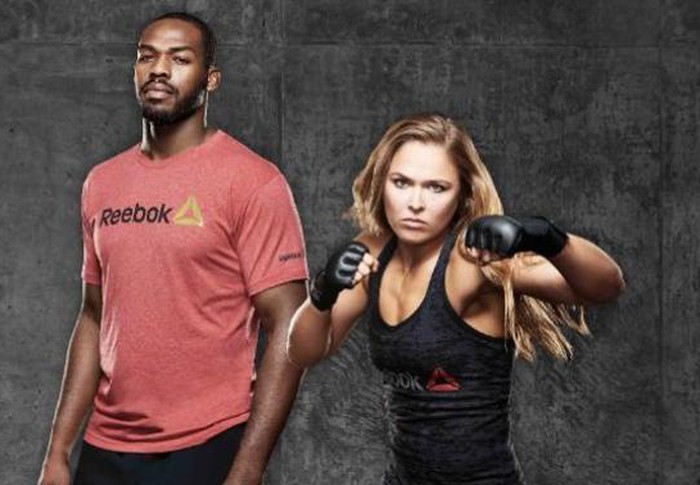 The UFC and Reebok recently unveiled a six-year deal for the athletic apparel company to provide the MMA juggernaut with uniform options for all of its fighters, as well as brand apparel for fans.

While the financial details of the deal remain shrouded in secrecy, there are already a couple of fighters that we know will benefit from the new partnership. Reebok on Tuesday informed MMAWeekly.com that it had signed partnerships with UFC champions Ronda Rousey and Jon Jones.

Rousey and Jones will be working closely with Reebok to help develop and launch the brand’s new range of UFC apparel, as well as a new collection of footwear and apparel specifically created for the more than 35 million people around the world who participate in combat training to stay fit.

“From the very beginning, it was clear to me that Reebok is passionately invested in our sport and its athletes,” said Rousey. “The team is committed to helping push our sport forward and I am proud to be part of it. Reebok understands what tough fitness means for women and what women need for their fitness lifestyle.”

“Reebok is working with UFC to take the sport to the next level. It’s going to be an amazing journey and I’m incredibly proud to be a part of it,” added Jones.

“Not only are Ronda and Jon admired by millions of UFC fans, but they also are among the fittest, most disciplined athletes in the world, and an inspiration to the millions of people around the globe who train like fighters,” said Matt O’Toole, President, Reebok.

No financial details of the Rousey and Jones signings were released.

As part of the long-term partnership with UFC, Reebok is creating UFC “Fight Week gear” and “Fight Night Kits” for all UFC athletes, as well as an apparel collection for UFC fans.